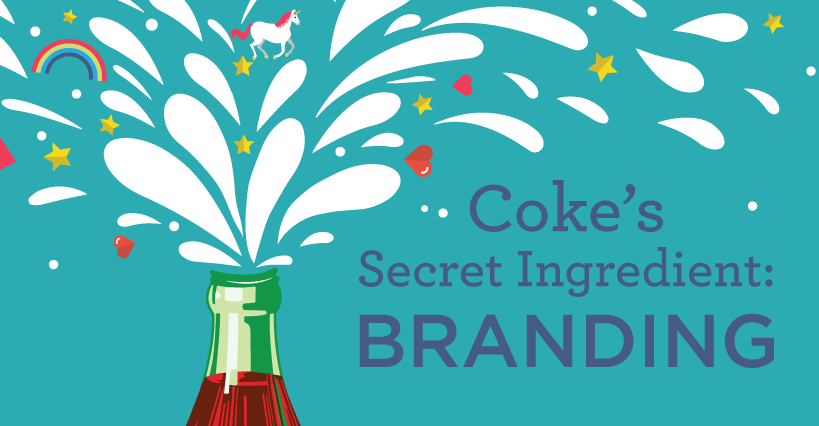 It is rumored that the two most recognized words in the world are “OK” and “Coke”. Coca-Cola was invented in 1886 by Dr. John S. Pemberton, an Atlanta pharmacist who found that when the syrup was mixed with carbonated soda, it made a tasty beverage. Within ten years, thanks to genius branding that lent to Coca-Cola’s iconic script and its 5 cent price tag, Coke became the most popular soft drink brand in the United States. But what can you learn from Coca-Cola that can be adapted into your own brand strategy? What makes Coke’s brand recognition so strong? Check out these five elements of brand awareness that Coke has perfected, that you might be able to borrow.

SIMPLICITY
Coke uses a timeless font that has remained relatively untouched since 1886, when Pemberton’s accountant designed the name longhand. The Coca-Cola logo has been hardly changed since, making it one of the most recognizable brands in the world. The red color draws attention. Linked to a sense of urgency and known to increase the heart rate, red is a color that draws the eye.

A simple channel of communication that consumers may not think about, but impacts attractiveness and decision-making, is packaging design. In Coca-Cola’s case, its bottle shape. The classic bottle shape, designed by industrial designer Raymond Loewy, has been described as the “perfect liquid wrapper.” Its fluted contours are as iconic as its patented logo, and hold a strong association with American values and nostalgia. At a time when drinks generally came in flat-sided bottles, Coke differentiated by using a design that was the VW Beetle of bottles (as was the comparison while designing the contoured shape). At 5 cents a pop, the soda was a beverage for which the richest and the poorest had a taste.

CLEAR VALUES
Coca-Cola’s core values are “leadership, collaboration, integrity, accountability, passion, diversity, and quality.” These values are the pillars upon which the brand is built, providing a heartwarming story that speaks to why Coca-Cola is in business. In 1931, the brand took a huge leap and popularized Santa Claus with the Coca-Cola red color as a childhood representation of fun and bringing people together. Clearly expressing these values through the consistent use of core brand assets have built up recognition over time. Coca-Cola is without a doubt the finest expression of an effective “sincere” brand personality.

CONSUMER FOCUS
Sustaining a brand in the long run requires passion: a passion for the brand’s commitment to their values, but most importantly, a passionate commitment to its consumers. Over the years, Coca-Cola has sponsored and funded initiatives to clearly define their core values, and reinforce them in the public sphere. The sponsorship of the Olympics (started in 1928), WWF (World Wildlife Fund), PNB (Partners For A New Beginning) and USAID, positions Coca-Cola as a benefactor, whose aims are for health, sustainability, and the general betterment of all people. Acts of compassion like these tie into Coke’s commitment to its core values of happiness, opportunity, authenticity and togetherness.

On a microeconomic scale, if a company meets (and exceeds) the requirements of their consumers, these consumers are more likely to become loyal. However, if a consumer revisits a brand, he or she will expect the same level of quality as they did their first time. Coca-Cola has maintained a high standard for their brand since the beginning (they used to send reps to retailers to ensure that the cola was never served above 40 degrees).

CREATIVE CAMPAIGNS
The values of Coca-Cola – happiness, opportunity, authenticity and togetherness – are key factors that shape their marketing campaigns. The famous “Happiness Machine”, “Hug Machine” and “Let’s Look a Little Differently” campaigns all work in tandem to simplify the values into easily-digestible gulps. It’s important when creating campaigns to build concepts that condense the values so they resonate with the target audience. In Coke’s case, their demographic includes everyone, which is why campaigns like, “I’d Like to Teach The World to Sing” are so successful. This campaign in particular captured a utopian ideal that appeals to anyone, and anyone can contribute to this ideal by purchasing an ice-cold Coca-Cola. Consistently standing by values like these has fostered a greater level of customer-brand trust, especially when compared to similar manufacturers like Pepsi.

SOCIAL MEDIA
Coca-Cola’s marketing campaigns are incredibly successful and are buoyed by their social media. Currently, Coca-Cola has almost 90 million likes on Facebook and 2.92 million followers on Twitter. Its recent ‘Share a Coke with…’ campaign sold 250 million ‘named’ bottles in summer 2011 in Australia alone. The campaign has now reached 50 countries and gained 125,000 shares in the month after its launch in the United States. A large part of Coca-Cola’s success comes from highly effective advertising campaigns and relentless promotion on social media, often involving contests and promotional events.
It is important to note Coca-Cola’s dedication to cohesion across all platforms. By cross-posting between Tumblr, Facebook, and Instagram, the brand has been able to successfully reach a large audience with one central campaign. This cross-platform engagement can be emulated by creating activities to encourage audience participation, by utilizing crowdsourcing, paying careful attention to SEO and social media metrics, and transposing an early-adopter attitude to new mediums. Coca-Cola makes their pages interactive and fun so that people want to keep visiting, interacting, posting, and following. Differentiating strategies between mediums by paying attention to who uses them can be an effective way to target your campaign. For example, 53% of 18–29 year olds use Instagram compared with 6% of 65+, but 56% of adults 65+ use Facebook.

Now that you’ve had a taste of Coca-Cola’s secret ingredient, try adapting parts of their recipe into your own secret formula! Branding is your company’s personality, its image, and its character. Branding is what your consumers see, thereby shaping their opinions of your product, service, or values. By emulating the best, Creative Juice can help keep your branding clear, simple, focused, effective, and well-suited for the modern age. Contact us today to hear more about our branding services.