Say What You Meme, Meme What You Say: Using Memes to Attract Your Audience 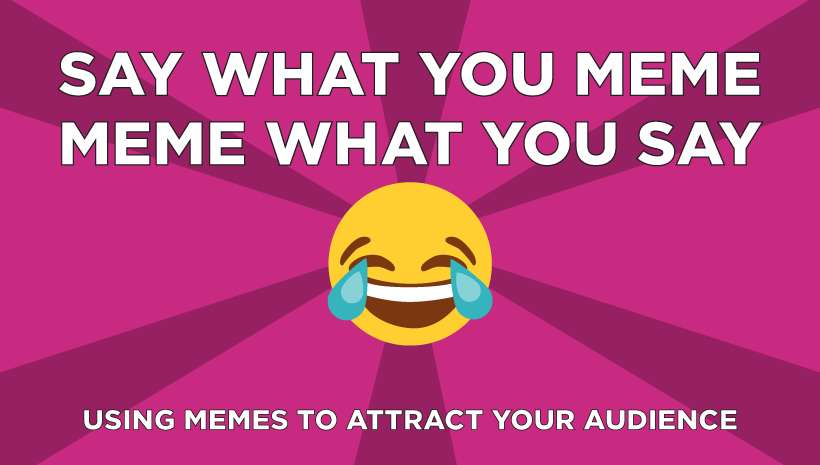 Say What You Meme, Meme What You Say: Using Memes to Attract Your Audience

Much funny, such cool. Though grammatically incorrect, this nonsensical phrase amongst others has made it into the digital Zeitgeist of internet humor. Every few weeks, one new meme will achieve viral status, be circulated through multiple platforms, and then be retired. It’s a cultural swapping of jokes that advertisers have attempted to utilize in order to reach younger demographics. “Memevertising” isn’t always easy, but if done correctly, it can win you the “likes” and love of millennials.

Memes can be characterized as clever, memorable, and concise. Anything more than 20 words can be far too much to digest and will easily be scrolled past for more accessible content. The reason they’re so unique is their ability to convey the complex idiosyncrasies of life and relay them in a relatable manner. There you have it, the key to being the keenest kid on the block.

It’s actually not that easy to properly utilize memes in your advertising. If your brand doesn’t already consist of some humor elements, the sudden introduction of a meme will come across as forced and ingenuine. A Twitter account called @BrandsSayingBae chronicles cringe-worthy corporate attempts at being trendy. Don’t force yourself to be funny if you aren’t funny. Period. Desperately trying to boost your popularity by cashing in on an already viral meme is commonly referred to as “memejacking” and isn’t a good look for any business’s brand. Once you find out if memes are right for you, there are a few factors one must keep in mind.

Nothing says “how do you do, fellow kids?” than obviously trying to push your product. A good tip is to try to make the experience more about the lifestyle of users rather than trying to boast about how awesome and cool you are. Try to appeal to universal experiences that your demographic might have experienced. A good example of this is Hirewire’s Instagram. Here, you can see they consistently post about events that are genuinely funny whether or not their name was attached to the meme.

Another corporate meme-powerhouse is surprisingly Denny’s. Time after time, they exaggerate the eccentricities of a meme and take it to weird new heights. Whoever is running their social media is well-aware of what is going on in the internet and has gotten the company recognition for their marketing genius. That’s the beauty of making a truly great meme advertisement, properly funny ones will be shared for you by new potential customers and reach an extremely wide audience.

While we’re a team of millennials, The Juicers only indulge in a meme or two every few months. We like to focus on showcasing our branding skills but it’s always fun to be a part of the crowd and join in on the latest joke. Keeping you current and trendy is what Creative Juice is actually all about. That’s no laughing matter!