Serving Up Some Font Philosophy 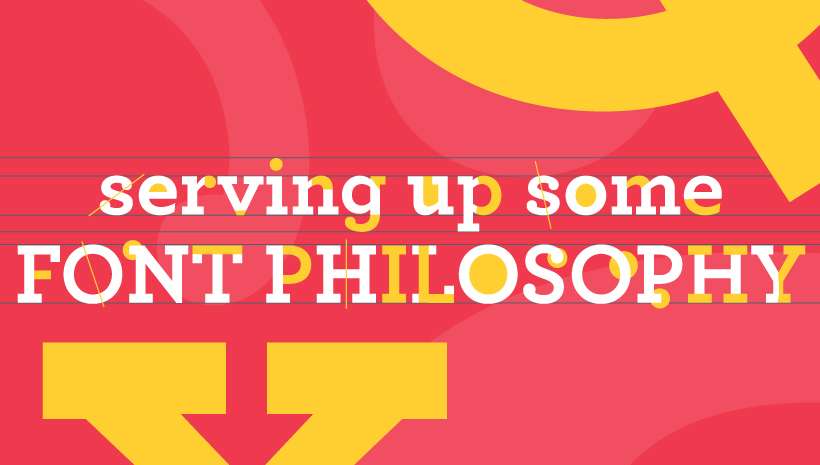 Serving Up Some Font Philosophy

While default fonts like Times New Roman and Myriad Pro being ever-present in the work environment, the specific selection of a font can easily elevate the way your written words are received. There’s so many pre-loaded options for fonts on your computer that might be tempting to experiment with, but be careful while choosing the vessel for which you carry your message to your audience. Being wise with your fonts is one of those special talents that can easily make you that much better than your competition.

The two aforementioned fonts are both serif fonts. A serif is a slight projection finishing off a stroke of a letter in certain typefaces. Typically, fonts that have serifs are used in more professional, organized, and formal settings. In contrast, fonts that don’t feature these characteristics are called sans-serif fonts. They tend to have more fun, open, and geometric feelings to them. You might recall Google’s logo suddenly shifting from serif to sans-serif. It caused a huge uproar at first with those who were uncomfortable with such an abrupt change. However, Google knew it was right for their brand to market itself as a more modern company and chose to reflect that by choosing to go sans-serif.

There are a few more types of fonts to consider besides these popular two. The slab serif is similar to serif fonts, except the projections of the letterforms take the form of a rectangle. Script fonts mimic the feeling of handwritten or cursive forms that invoke the idea of elegance. Display fonts are strictly used at bigger sizes and are suggested to not be used for paragraphs at a time. You have plenty of options of categories when it comes to font selection. Such diversity can be overwhelming for the beginner, but for Creative Juice, this is our playground and one of the many details we take into consideration during the design process.

It’s easy to have strong opinions when it comes to fonts. Comic Sans is, oftentimes, the victim of non-designers not understanding it’s the true purpose. It was designed specifically for children and comics (hence the name), but its widespread use in content where it shouldn’t belong has garnered heavy, undeserved criticism to its worth as a font. Be sure to take the time to truly understand the fonts you choose. Creative Juice uses Gotham and Archer for a juicy combination! Our designers have personal favorites such as DIN, Avenir, Montserrat, Didot, and Akkurat.

Well-designed marketing pieces take the details seriously. It is within these details that one business is set apart from its competition and new clients find their way the service they are looking for. There are also a lot of questionable fonts that exist on the market, so don’t just download any random free font you might stumble across online. It is worth investing the time to get to know the font that will best help you achieve your business goals. If the sea of fonts becomes intimidating, Creative Juice can always provide guidance on the pitfalls and tried and true fonts that are best for your line of work.