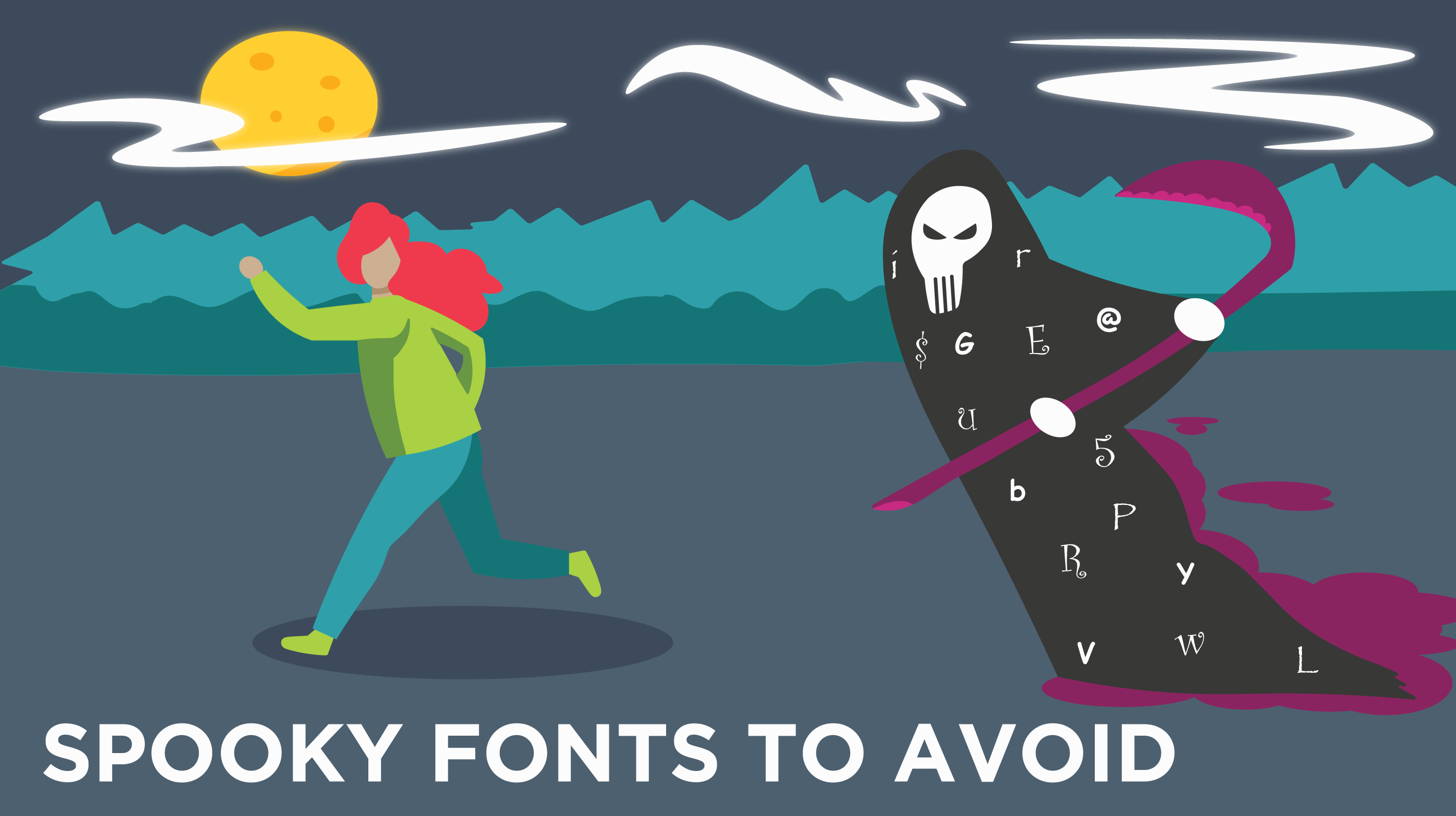 We all know THAT font. You know, the font that makes you gasp. We get it. It sends chills down your spine. You might even say it’s TERRIFYING (Okay, sorry. It’s Spooky Season and we’re a little excited). Today, we’re highlighting some spoooooky fonts that should never be used in your design efforts!

The most infamous of the fonts we are going to cover today is none other than Comic Sans. It’s overused. It’s elementary. It’s the feature font on a second-grade teacher’s addition handouts. Comic Sans is childish at best and “Windows XP” at worst. In 2003, Comic Sans was the “fun font,” but things change. There are lots of fun fonts out there that are a little more… this decade!

If you don’t trust us, a little Google search will go a long way. There are actual hate groups online for this font, so it goes without saying that it’s not a font you should get behind. For your business to be respected and taken seriously, avoid Comic Sans at all costs.

(Honestly, even if you’re a second-grade teacher, consider making the switch to Century Gothic…)

Our next spooky font, Papyrus, may have a Biblical visage but is no Patron Saint of typography. You may recognize this font from the highest grossing movie of all time-Avatar. But just as you wouldn’t paint yourself blue, Avatar’s feature of Papyrus does not justify its use. One of its primary defects is that it’s almost illegible. Didn’t we develop actual fonts so reading ancient scripts would be… easier? Don’t make it harder on yourself. Papyrus has no place in your designs for any reason whatsoever.

Remember those embarrassing turns of phrase you had posted in vinyl on your lime green childhood bedroom wall? They were in Curlz MT, weren’t they. Curlz MT might be our personal least favorite on this list. The novice designer might think Curlz MT is “whimsical” or “cute.” That may be true, but its awkward positioning and questionable legibility render it inferior to the plenty of other curly, artsy typefaces out there.

Artistry is necessary, but it is of utmost importance that your business is taken seriously,  If this font is in your branding, you might just be the laughing stock of the industry.

It’s the default. Well, it was, and then it got outdated for Microsoft Word. If Office Suite isn’t here for it neither should you be. One word to define Times New Roman? Ordinary. But does the word “ordinary” really describe your business? If you just answered “yes”, don’t take it as the “all clear” to use Times New Roman… take it as a sign to rethink your business.

When I was 10 years old and first learning how to use Microsoft Powerpoint, I was also in the process of opening my own movie theater. Yeah… that never really took off, but the point: my flyers were in Brush Script. This font does not carry with it the eloquence it clearly wants. It’s too bold, it screams “put me in a comic strip”, and it barely follows the standard convention for cursive writing.

Pro Tip: A lot of people nowadays can hardly even read cursive, so pick carefully when choosing a script font. And when you do decide to use one, steer clear of Brush Script.

If you are a victim of these fonts or similar ones, or if you know someone who is, please feel free to contact one of our Juicers! We would be happy to help you with any design updates you need. Your font is important to your branding, so reach out today!