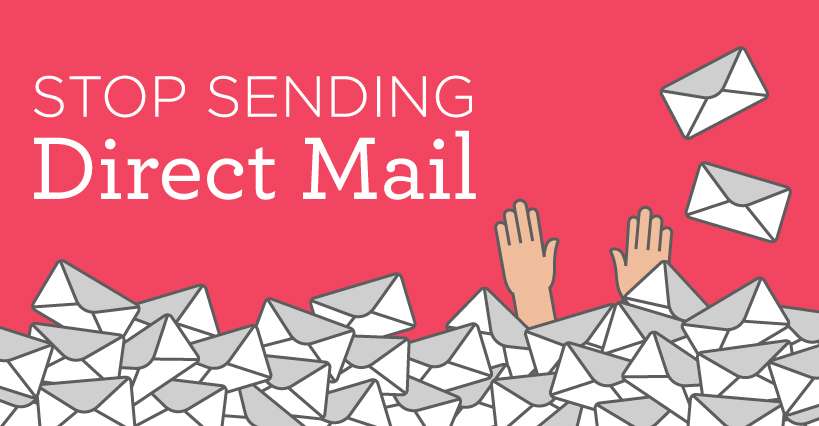 The term direct mail is a bit of a misnomer. The word “direct” implies focus, a straightforward approach, while the actual practice is anything but. Direct mail marketing is casting a wide net in hopes of catching something, anything. It’s hurling a handful of darts, praying the law of averages takes over and one of them hits the bullseye. It’s the physical and no more desirable twin of spam emails, which is why you should abandon the practice altogether.

We love getting mail, we just do. They are like tiny gifts we receive on days other than Christmas or birthdays. And yes, most of the time it’s something we ourselves ordered from Amazon or Etsy, but it’s a present nonetheless.

However, more often than not we’re bombarded with piece after piece of pre-approved credit card offers, out-of-this-world rates on that new 2016 car model, and politically charged postcards “enticing” us—in the heaviest quotes possible—with mudslinging campaigns. It’s garbage that somehow overshot the trash bin and ended up in your mailbox. Worst of all are the ethically gray tactics they employ.

Misleading Advertising
At some point in time, we’ve all walked to our mail, opened it up, and were greeted by an ominous plain envelope with bold red words on the front: “Urgent! Open Immediately.” Should this be the first time in receiving something like this, you may incur a mini anxiety attack. Thoughts would race to every event that could result in the mailing of such an urgent mail piece. Opening it immediately, its contents specify just how critical the information truly is: “You could save up to $50 a year in subscription fees! Find out how!”

Other than its egregious use of exclamation points, this mail piece made another serious error—falsely playing upon the recipient’s emotions by attaching grave importance to something hilariously low-priority. That’s what the experts like to call deception, and no one likes being lied to, funnily enough. Entities who employ this strategy genuinely confound us. Has something like this truly ever worked? I doubt someone out there thought, “Oh, I assumed this had something to do with my past medical bills, but now that I see it’s for a magazine subscription, I realize it’s much more important.” This false sense of importance does nothing good for the respect of a business, and would most certainly leave a bad taste in the recipient’s mouth.

Too Good to Be True
Another decidedly popular-yet-questionable tactic is what we’d like to call the QVC approach. For those of you who are unaware, QVC is a channel devoted to an endless string of half-hour sales pitches and infomercials. Similar to the example above, this involves grandiose half-truths and promised savings. At least they have the “dignity” (yet another word weighed down by heavy quotes) to remove the false sense of urgency.

What they do add is extra fluff sentences. Statements like, “An offer too good to refuse,” and “Limited time offer.” Whatever they’re marketing/offering, they pass it off as a once in a lifetime event that needs to be acted upon now, before it’s too late. A tad more innocent than the misleading urgency option, though not any less annoying.

These are the bottom rungs of marketing. Much like bulk emailing, its physical counterpart garners no support, no sympathy, and certainly no respect. And like digital spam, physical spam can and will often paint its originator in a bad light; which could prove most detrimental to the company in question.

Impersonal
Moreover, direct mail can come off as cold. Odds are if a mail piece is sent to “Current Resident,” it will quickly find its new home in a garbage can and be promptly forgotten. It’s highly unlikely a person lives in the United States by the name Current Resident. If there is, we apologize on behalf of your parents, for they surely lost a bet before naming you.

At any rate, imagine being sent a postcard for a lovely six-seater minivan. You, the twentysomething single college student. What about being sent mail about an upcoming 12K run and you’re fresh on crutches from a recent accident? Direct mail does not take into consideration the people to which it’s being sent. That’s like sending out several thousand birthday cards to Susan, with the desire that someone out there will fit the parameters of being Susan, while having recently celebrated another year of life. While it’s insane to expect advertisements or marketing campaigns to be specifically tailored for you, it’s not crazy to want to only receive things you’re interested in.

All in all, direct mail needs to go the way of the horse carriage and, a more recent example, Blockbuster. It’s a vestigial marketing tactic that has not aged gracefully and has far more cons than it does pros. Excessive and unnecessary use of paper? Yes. Detrimental to a company’s overall image? Yes. Exceedingly annoying and a waste of a consumer’s time? Most definitely.