Why Creatives Rule the World 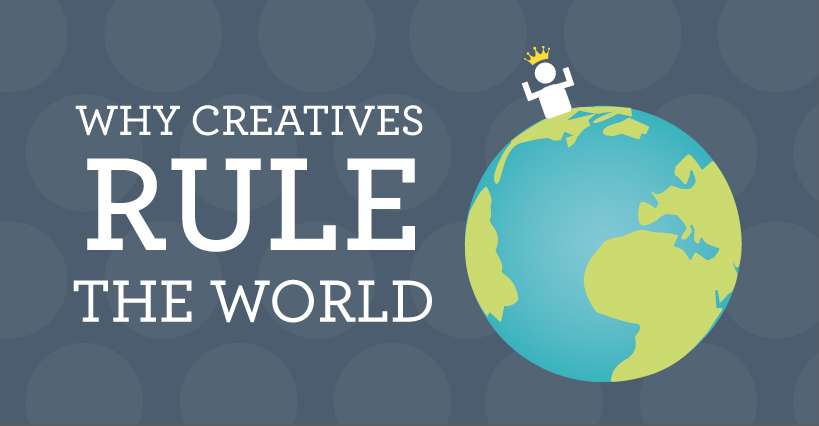 Why Creatives Rule the World

There’s this box everyone says we should think outside of. A nebulous thing known worldwide with a constantly shifting set of rules. And of course, this so-called box is different for everyone, be it business or individual. The concept is nothing new either, creative thinkers eschewing convention, taking the road less traveled. And in the current climate, it’s the very thing that’s helping creatives find success on a global level.

No Stranger to the Abstract
The field of business has grown exponentially, spreading forth in all directions. With that expansion comes room for more complex modes of thought; an increasing web of ideas and concepts where linearity and singular focus no longer cut it. Creatives seem to have a knack for multitasking and jumping from project to project when the need arises. They don’t often follow a blueprint so much as they do their green thumb—planting seeds, tending the soil and adjusting the light or water if need be.

The abstract is where they set up their homebase, and if something needs to change, they change it. There’s no clinging to a rigid regimen. They don’t adhere to structure-structure adheres to them. This homebase is right where you would expect it to be: outside the box.

Making Connections
Creatives, an ironically uninspired moniker, are so-named because of their—you guessed it-creativity. Through their eyes, the world is a vastly different place, making connections/observations others may overlook. Take a locked door as an example. What are your options? Finding the key? Picking the lock? Kicking it in? All valid options, in some form or another; but there’s a fourth, a fifth, a sixth. You could take the door off its hinges, check a nearby window, or simply knock.

Obviously there are many more factors to consider when faced with a locked door scenario, but it leads into the idea of adaptation, changing the flow of thought. There is no such thing as the status quo to the creative, only what can be. What will be. And what always “will be” are stories.

Bring Some Feeling Into It
When someone utters the phrase “it’s just business,” the connotation is that it’s free of emotion, passion, and empathy. So it’s unsurprising that creative individuals took this as a challenge to subvert expectation. We see it all the time in commercials.

Advertisements like the one above don’t leave emotion, passion, or empathy out of the equation. In fact, they have it front and center. In a matter of sixty seconds, Google sold us a search engine via a more compelling love story than most full-length features films. That is certainly an accomplishment most companies cannot claim.

It’s this combination of business strategy and emotion that, we feel, give the upper hand to the creatives of the world. A marriage of business and story that do an excellent job not only in telling a compelling narrative, but disseminating desired information to the public. The more logical party members may overlook the importance of story—the human connection—of a campaign. It’s the creative’s responsibility to recognize the connection and see it to fruition in tangible form.

Find Beauty In All Things
Even at a base level, an aesthetically pleasing environment is often desirable to most people. This idea is no different when it comes to the business world. The example below, an advertisement for the company Airbnb, provides an excellent combination of both story and design as a means to reach the world at large.

As we mentioned before, the marriage of narrative and marketing is a powerful tool. It’s campaigns like these that reinforce the idea of telling stories while also including information on a product or service, not vice versa. The more logistically inclined want to let you know of the numbers, of the percentages, while creatives want to let you know of the emotional impact that the company has fostered.

The creatives of the world are the outliers, making connections many of us don’t see, answering questions many have not yet thought to ask. They are on the frontline, changing the shape of business, restructuring how things are done. So go beyond thinking outside of that boring box. Stand on it, elevate yourself. Use it as a pedestal and let the world know of your ideas.