What’s Love Got to Do with It? 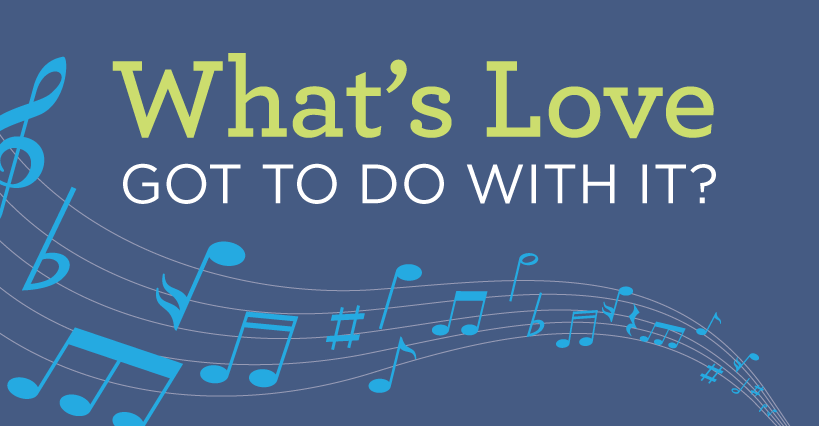 What’s Love Got to Do with It?

A good graphic designer pours love into their craft. Time is spent transforming ideas into visuals through close attention paid to minute details of line, color, and space. Navigating the relationship between syntax (the design) and semantics (the meaning behind it), and having that hidden message generally understood, is a difficult art to master. All ads create a narrative in some form, something quick that doesn’t require explanation. The success of advertising, facilitated by talented designers, lies in the ease of communication. But how do you communicate something as complicated and difficult to define as the concept of love? Presented below are five designs that attempt to define love by utilizing one of love’s most popular mediums: the love song. Inspired by love songs, each of these five designers condensed their feelings into an image. We will examine what they did right to move their feelings out the image and into your heart.

1. 69 Love Songs by Charles Bloom
Inspired by Stephen Merritt of The Magnetic Fields, Charles Bloom designed pictorial representations of tracks from the three-volume album titled, 69 Love Songs. Pictured here is a grid of nine icons, showing a unified theme and color palette that establishes a somber, almost bitter, representation of love. We are peering through a porthole into each of the nine scenes, a snapshot borrowed from the narrative of each track, whose titles are encapsulated in the banners beneath each icon. An icon is a visual sign that is a literal representation of a signified object. In this case, the icons are literal stand-ins for turns of phrase used in each song lyric. Without hearing the songs, the context is ambiguous, and the symbols are rendered meaningless. This is a niched project that wouldn’t apply to everyone.

2. Love Songs by Orlando Illustration
Borrowed from the Van Halen song, Ain’t Talkin’ Bout Love, Orlando Illustration designed this image as part of a set of love-inspired ads for a dating website. Using autumnal colors, this subdued illustration lifts the song’s title from a niched heavy metal reference to a topic applicable to all those who have been broken-hearted. The piece uses a grainy filter to apply a screen-printed texture, a popular stylization that can be used to keep vector illustrations from appearing flat. The illustration is a literal representation of the lyric, with jumbled gibberish that is presumed to not be about love. Featuring three nesting heads of ambiguous genders or races, the image focuses on the comprehensive: being applicable to the target audience, i.e., members of the dating website.

3. I Will Always Love You by Johanna Burai
This surrealist poster by Johanna Burai displays the use of collage, cubism, and type as an image. This image features a young Whitney Houston haloed in a soft, rainbow palette and immersed in a bed of clouds. When we see her in the foreground, enveloped in many cubes, there is a sense that we are looking at an angel, remembering a pop idol who represented the innocence of young love. Being a modern minimalist designer for printed matter, Burai plays with the negative space. The poster is a smaller canvas within a larger canvas where the type resides. Even though the type is obscured as a background element, the semantics of the image complete the association. The viewer knows that the type reads “I will always love you” without having to see the full text.

4. Persephone Don’t Want No Scrub by Fly Art Productions
Fly Art Productions, a tumblr dedicated to the juxtaposition of classical art and hip hop lyrics, has mastered the fine art of semiotics (meaning-making) in a clean and brilliantly simple concept. In this design, a relationship is forged between Simone Pignoni’s The Rape of Persephone (c. 1650) and the track, No Scrubs by TLC. Aside from an overall commentary of hip hop and its role as a modern art form, the collection combines a simple type and image, allowing the viewer to easily draw the connection between the lyric and the classical piece to build their own narrative. Fly Art’s collection has a masterful grasp of syntax and semantic, demonstrating how lyrics from today are eerily applicable to portraits from the past.

5. Pictures Of You by Butcher Billy
Taken from the series, Tales From The Smith by Butcher Billy, this is not actually the cover of a horror magazine or comic book. It is a spoof. In this collection of designs, Billy has injected humor into the macabre realm of horror comics by juxtaposing Robert Smith’s lyrics from The Cure’s Pictures of You with a modern take on Tales From The Crypt. It’s silly, it’s nerdy, and accessible to those who catch the references. Billy has mastered layout and line, by using the same format popularized by 1940s horror comics and the same rough, sketchy lines popularized by comic artists. He has a familiarity with the medium that shines through and is appreciated. The use of the iPhone and the skeleton selfie brings the piece up-to-date instead of keeping it bogged down in historical comic references. Even if you don’t read comic books or even know who Robert Smith is, the narrative within the design is humorous enough to attract attention, widening the appeal to the largest possible audience.

Love is a difficult idea to conceptualize in design, but we believe that these five artists have done it in eye-catching ways. Love is universal, and at Creative Juice, we believe that if a designer loves their work, it will shine through to the finished product.

*Each artist has been contacted and gave permission to use their images for this post.