6 Logo Rebrands in Less Than 6 Months 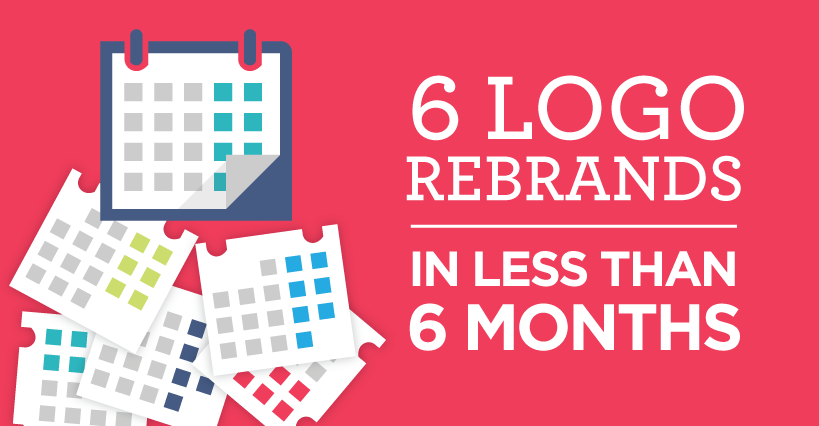 6 Logo Rebrands in Less Than 6 Months

Four months into 2016, and companies are rebranding like crazy. The internet is buzzing with the latest in logo design trends, as the giants in the industry face another series of updates, some not having had a fresh face-lift since the 1990s.

The overall trend is minimalism. Less is more. Playing with negative space, inverting text in the background, and reducing to monochromatic palettes is all the rage. The assumption is that people want sleek, professional, clean designs, with fewer graphics to enable faster loading times in our ever-growing internet age.

Here are six surprising redesigns so far in 2016, in case you missed them:

1. Uber
In February, Uber shocked everyone with a logo rebrand. Changing from the ubiquitous black and grey “U” to an abstract geometric shape, Uber is choosing to embrace brighter colors. Part of the rebrand stemmed from inconsistent logos across Apple iOS and Android, one containing a border and the other without. Uber decided to up their typography game, opting for a font that was easier to read, but this change inspired a whole brand refresh, something that hadn’t been done since the brand’s initial start-up. This new design hopes to rebrand Uber as more modern and mechanized than before, using “bits and atoms” as design illustrations that nod to high tech. They’ve adopted new color palettes for different regions, but the app itself hasn’t really changed. Uber’s redesign exposes how design can help a brand grow, change, and find itself, while remaining relevant to the market at large.

2. Bing
Bing’s new redesign looks vaguely familiar. Perhaps it’s the letter spacing, the long slender “ing” or the triangle logo, but Bing’s new logo reminds me of something. Oh yeah, the old logo. It looks pretty much the same as the old logo, excluding a color change and capitalized B. The logo redesign begs the question: Why bother? Surely they aren’t repositioning the company, surely the change in logo color isn’t attracting users who prefer teal over yellow. Aside from a freshening up, the logo is still setting the company up for a firm second place behind Google’s sleek new fontface.

3. Blue Bunny
Wells’ Enterprises has unveiled their first logo change to Blue Bunny ice cream since 1996. Part of a full-scale rebrand, the Le Mars ice cream manufacturer has switched from the straightforward bannered logo to something out of Japanese kawaii. A bouncy new “Blue Bunny” features baby blue bubble letters and a cartoon capital “B” equipped with a cotton tail and ears. The brand has updated packaging design across ice cream segments to display kitschy cartoon versions of the product. In case it wasn’t cute enough already, for their TV campaign, the brand revived their 1930s mascot named, you guessed it, “Blu” the bunny.

4. Bud Light
Possibly redesigned to compete with craft beer alternatives such as the “champagne of beers,” Bud Light’s new design uplifts the racing striped blue and white can from its former “party animal” appeal in favor of a sophisticated blue on blue contrasting insignia. The new can revives the Anheuser-Busch crest, not seen since 2001. The new design lends to the imagination of coiffed bearded buddies purchasing a 30-pack of these for a weekend camping trip, or popping the top on a tall boy in your local dive bar. It will be interesting to see if the classy redesign changes the popularity and appeal of this Football Dad favorite.

5. TNT
The TNT redesign is another example of uncalled-for updating in 2016. The former TNT logo was simple and iconic; a near-perfect representation of the action-packed, explosive, no nonsense man’s man entertainment you’d expect from TNT. The new logo is superfluous. What need was there to link the letters together, to create the inverted silhouette, to add that weird curve to the N? With TV programming struggling to keep up with online-only entertainment, we can only wonder what the point of this redesign was. A rebrand to attract younger viewers? Widen the audience? Remind us that TNT is still around and making unnecessary changes? The new logo is out of touch, and we hope the creative team realizes their mistake soon.

6. Swiffer
It’s hard to get people excited about cleaning. More like an upgrade than a redesign, the new Swiffer logo still misses the mark. With squishy rounded letters, gradients and drop shadows, the new Swiffer is a designer’s nightmare. However, the font is fairly cute and when rendered to wordmark, is a tolerable upgrade to the soulless commodity labeling that was the old logo.

As we move forward into the future of design, the psychological impact of branding will be interesting to note in accordance with logo design. Why these changes in 2016? How will it affect each company’s consumer base? Will the new Bing design really make a difference in the acquisition of new users? Is a cute Swiffer better than a plain Swiffer? The strength of logos is in their association and positioning, something to always keep in mind when deciding to upgrade a logo. Make sure that it’s worth it.

If you want expert advice about your logo, contact Creative Juice. Our team of designers are branding experts and know when a it’s time for a logo redesign.