Stand tall or not at all…Fair Fight wins it all 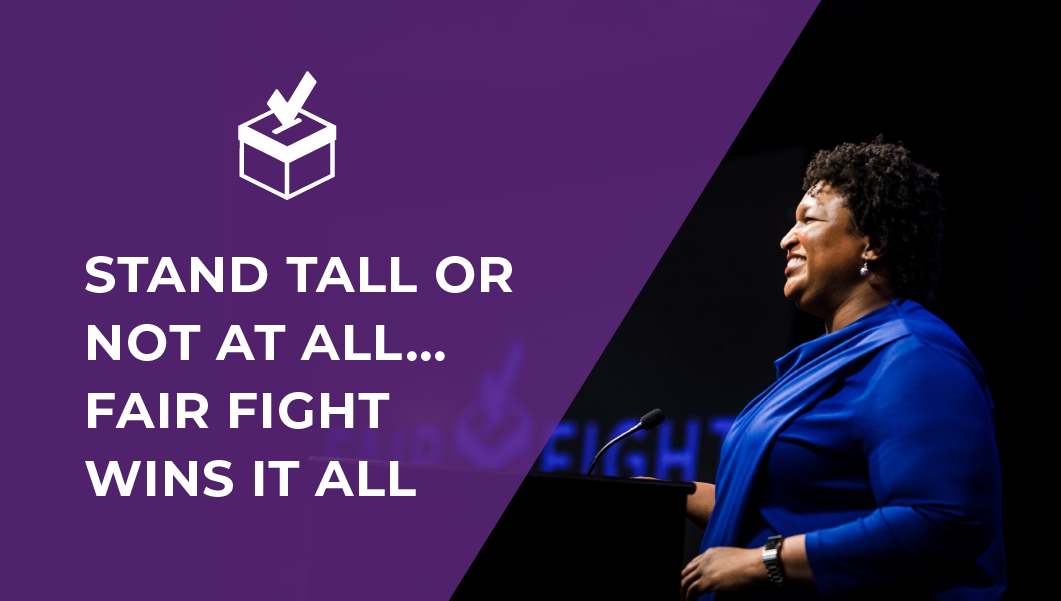 Stand tall or not at all…Fair Fight wins it all

Election Day has come and gone. Ballots have been counted and recounted, races have been called, and voters across the nation have been given a new hope. This election has highlighted voter rights and a fight that many registered voters didn’t know was still being fought. With all eyes on battleground states, like Georgia, Americans would learn about a visionary who fought to make sure every vote counted and every voice was heard: Stacey Abrams.

By now, many are well aware of the fight Abrams waged against racially motivated voter suppression that silenced more than 50,000 African American voters in 2018, resulting in her losing the race for governor. From that point on, she made it her mission to inform and register voters in key battleground states. She launched the Fair Fight initiative to organize voters and educate them about their voter rights and protections. As a result of her campaign, Georgia turned blue for the first time in 30 years, she forced two Senate runoff races, and the voices of thousands of disenfranchised voters were truly heard.

Abrams and her marketing team understood the importance of educating unregistered and suppressed voters on their right to be heard. To bring awareness to the campaign, they reached out to Creative Juice to build a website that would bring awareness to the Fair Fight platform, provide thorough and accurate information about election reform, and give users the knowledge they need to register to vote. We were honored to take on a project that was (and still is) so important for voter rights.

“The best antidote to misinformation is good information.”

A key factor in ensuring Fair Fight’s success was making sure that good and correct information was made easily accessible for the masses. Not only that, but building a user friendly website that prompted people to take action was another essential aspect to the campaign’s forward movement. Our designers and content writers understood that this was a two pronged approach:

Collaborating with the marketing team on messaging and desired outcome, the Creative Juice team developed a comprehensive content strategy that was aimed at effectively spreading information.

And boy, did it spread information! With the help of an effectively designed and curated website, the Fair Fight initiative received national coverage, serving as the cornerstone of this historic campaign. The website provided all of the information interested voters sought to learn more about, from educating people about the litigation loopholes that lead to voter suppression across the country to showing them how they can make a difference in the political process.

11 days before the election, 45 million Americans had already voted early – nearly seven times more than in 2016.

The key to the website’s success lies in the easy to navigate design and bite-size yet powerful written content, making it simple for visitors to consume information and take action. Accompanied by a Twitter campaign that now has 159,000 followers, website visitors were given access to podcasts, press releases, historical information, and up-to-date election news. It also provided ample opportunity to donate and join the cause. Combined with Abrams’ passion to ensure that every voter’s voice is heard, the campaign received a whopping $32 million in donations by October 2020, which Abrams then used to help the Democratic party increase voter registration and lobby for registration that would expand voter rights and protections.

Reports from major media outlets showed that 11 days before the November 3 election, over 45 million Americans had already voted early – nearly seven times more than the six million who’d voted in 2016 at that time. As we’ve now seen, that number has reached a historic high, with over 100 million early votes reported as of November 6 (according to the US Elections Project)